Info
Information on the show and characters.

Rude Dog and the Dweebs was about Rude Dog, a totally cool, retro dude and a bunch of other dogs who lived with him called the Dweebs. The Dweebs were a mixed up gang of misfits who didn't really know who they were and relied on Rude Dog to get them out of scrapes. The show was designed to promote a line of sportswear for Sun Sportswear, Inc. featuring Rude Dog and judging by the style of the character I could just imagine him plastered all over t-shirts and used as a surf wax symbol. I haven't seen any of the t-shirts or anything else from the line anywhere however, aside from online. I guess it was never released here in the UK. In 2005 the licence for the t-shirt designs was bought by a company called Out Of The Box. I own three of these t-shirts I found on eBay years ago, I am not sure how many different designs they released. You can see photos of these along with the tag that came with them on my merchandise page.
Recently, the licence has been bought out again by Rude Dog's original creator, Brad McMahon and there is now a site you can purchase really awesome and retro looking t-shirts of Rude Dog, some featuring the original designs from the 80s! There is a link to it on the home page of Rude Dog Delta!
Brad created Rude Dog, the Dweebs and Seymour the cat while under contract with Sun Sportswear in the 1980s. From August 30th 2015, Brad was able to get the trademark himself and thus begin marketing the t-shirts and designs people know and love.

Rude Dog ran a delivery service called Rude Dog Deliveries and there was a sign above their house that read "Need a delivery? Get rude!" under a logo similar to the one at the top of this page. They delivered all kinds of stuff from packages to lace doilys I seem to remember in one episode.

They didn't really have any enemies, except Seymour the scruffy alley cat and of course the dog catcher, Herman, and his big dog, Rott. However RD always outsmarted them and Seymour was actually scared of him!

As for the quality of the show, it was pretty poorly animated compared to today's standards. The animation was sketchy and seemed rushed in style and there wasn't as much detail or care taken in it as there is in toons today. However the stories were humorous and and the whole idea of the show was pretty cool. Episodes came in doubles and lasted approximately 20 minutes, 10 minutes for each story. In the UK, it was shown on CBBC 1 at around 4:00 pm. In the US it was shown on CBS. There was one season only that consisted of 26 stories altogether that came in doubles, making 13 episodes.

Rude Dog: Rude dog was the leader of the gang. Rude in the context used in the show meant radical, cool and totally awesome and he looked and acted it. He was street smart and drove a bright pink cadillac and also had a girlfriend called Gloria. I think if he was based on any real life breed of dog it would probably be a Bull Terrier, the type with the bullet shaped head.

Winston: Winston was the Dweeb who saw himself as more cultured than the rest. He knew things the others didn't like Shakespeare and stuff. He was very dignified and wore an eye glass (even though most of the time his eyes seemed closed). He was also pretty old. He reminded me of one of those old English Lords, the rich kind who like posh hotels and such. If he was based on a dog breed it would be a Bulldog or a Giant Schnauzer.

Kibble (Dweebet): The only female Dweeb in the gang. She tried to help out and often thought of pretty good solutions to problems. She tried to organise the others too sometimes. I always thought she was some relation to Winston cos they looked alike. She was never very feminine compared to other female dogs that appeared in the show, probably cos she was a stray. If she was based on a dog breed it would be a Bulldog like Winston.

Tweek: The smallest of the Dweebs, Tweek was easily scared by Seymour. Seymour always made it a task to scare him each day. Tweek looked up to Rude Dog pretty much like a father cos he knew Seymor was scared of RD. He often went on delivery rounds with him except once when RD asked Tweek to deliever some doilys and he was scared to because of Seymour. There was only one time he wasn't scared of Seymour and that was when his mind was on a pretty female dog which turned out at the end of the episode to be a Great Dane!! If he was based on a dog breed it would definately be a Chihuahua.

Reginald (Reggie): Reggie was probably the oddest looking Dweeb. He liked being cool and his bottom jaw was overshot. I think he was probably trying to copy RD by the way he acted. His voice even sounded a bit like him too. If he was based on a dog breed it would be a Staffordshire Bull Terrier.

Satch: Satch was a large neon green Dweeb. He was the supidest of the bunch and came up with loads of odd ideas like when Caboose was having nightmares and he told him to hold his breath as you do when you have the hiccups. Of course it didn't work. He also called chickens pidgeons once too. If he was based on a dog breed it would be a Great Dane.

Caboose: This guy had one fear......trains! Whenever he spoke he stuttered because of it. He had a run in with one when he was a puppy and ever since he's been terrified of them. His name is rather apt for the type of guy he is. However in one episode he finally overcame his fear of trains when he had to rescue Tweek from a runaway caboose. If he was based on a dog breed it would most likely be a Spaniel.

Barney: Barney grew up on a farm. Even his appearance was rather cow-like. He had toy farm animals he played with too, the most popular one he used was Willy the cow. Quacky the duck was another one. He sounded like a southerner and made chicken noises when he slept. If he was based on a dog breed it would be a Lurcher.

Seymour: Seymour the large blue scruffy alley cat was always chasing the Dweebs and scaring the life out of Tweek. He hated anything that sounded like work or going on healthy field trips. The only one he feared was RD because he was respected by everyone. Seymour could often be found rummaging through the trash cans at the back of the house.

Herman: He was the dimwitted dog catcher and tried each week to catch RD and the Dweebs. Of course he never succeeded.

Rott: Rott was Herman's dog. He was equally as dimwitted and Herman was always yelling at him. They were a pretty disorganised pair who could never acheive their goal. If he was based on a dog breed it would be undoubtedly a Rottweiler.

Here are some random things such as production art from the show.
My storyboards and cels 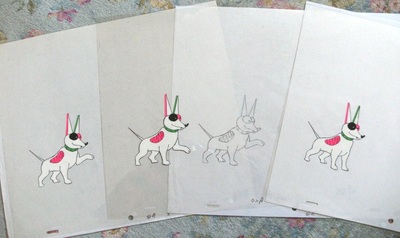 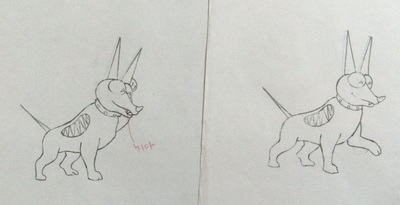 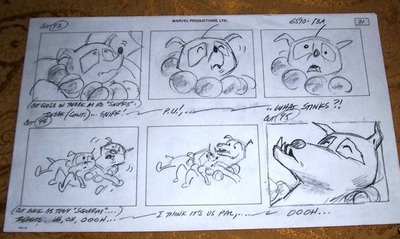 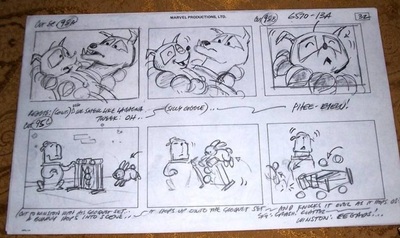 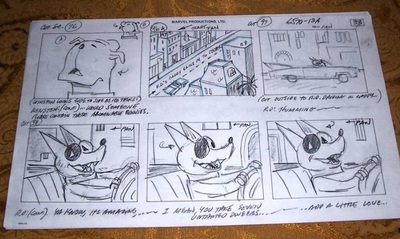 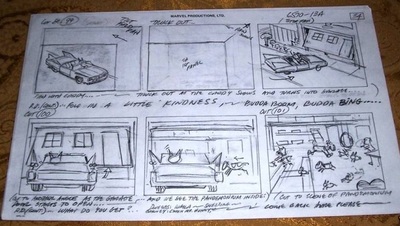 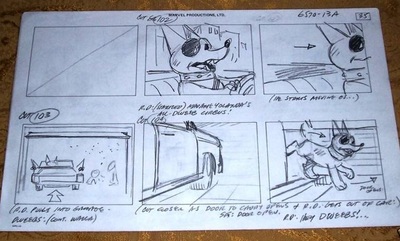 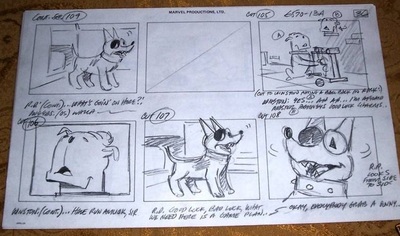 Other storyboards and cels 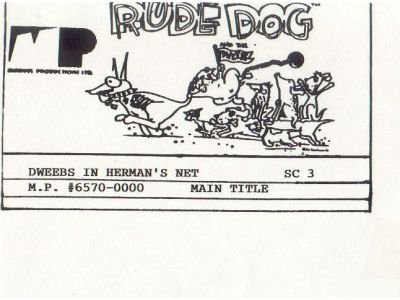 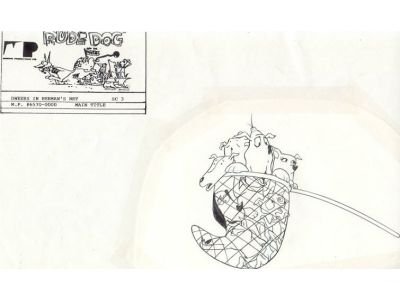 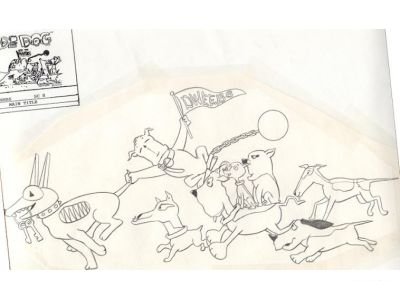 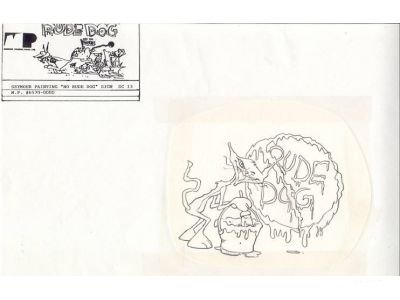 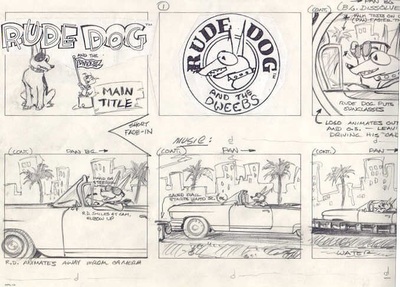 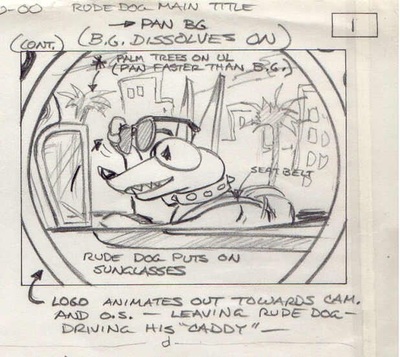 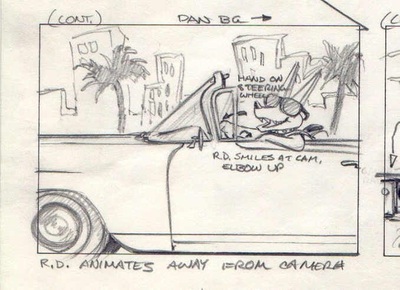 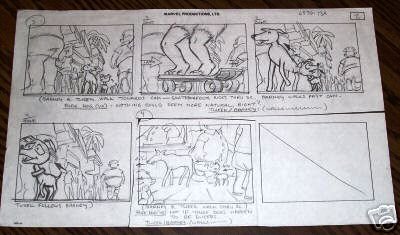 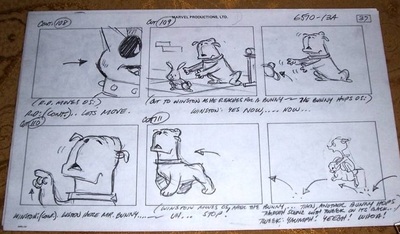 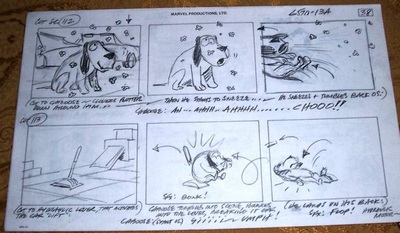 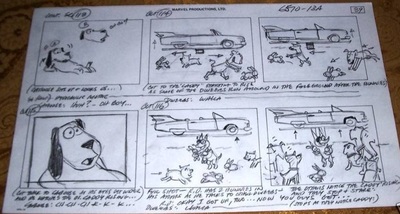 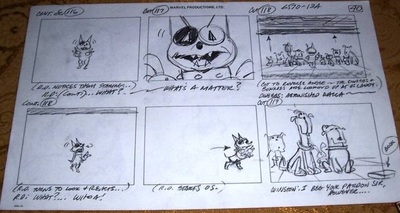 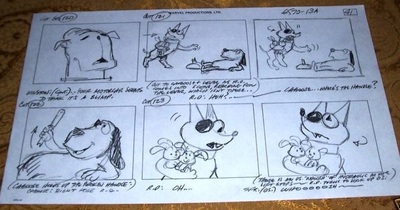 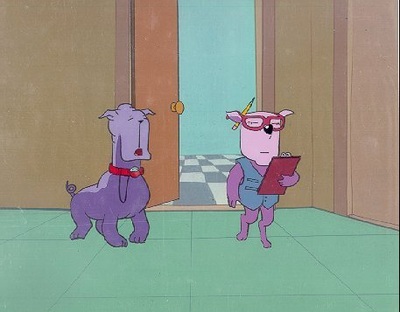 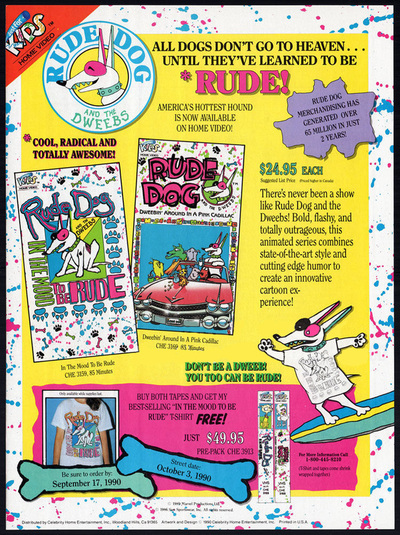 Disclaimer: Rude Dog and the Dweebs belongs to Sun Sportswear Inc. and Marvel Productions Ltd. Please E-mail silvolf (AT) tiscali.co.uk if you would like to use anything on this site.